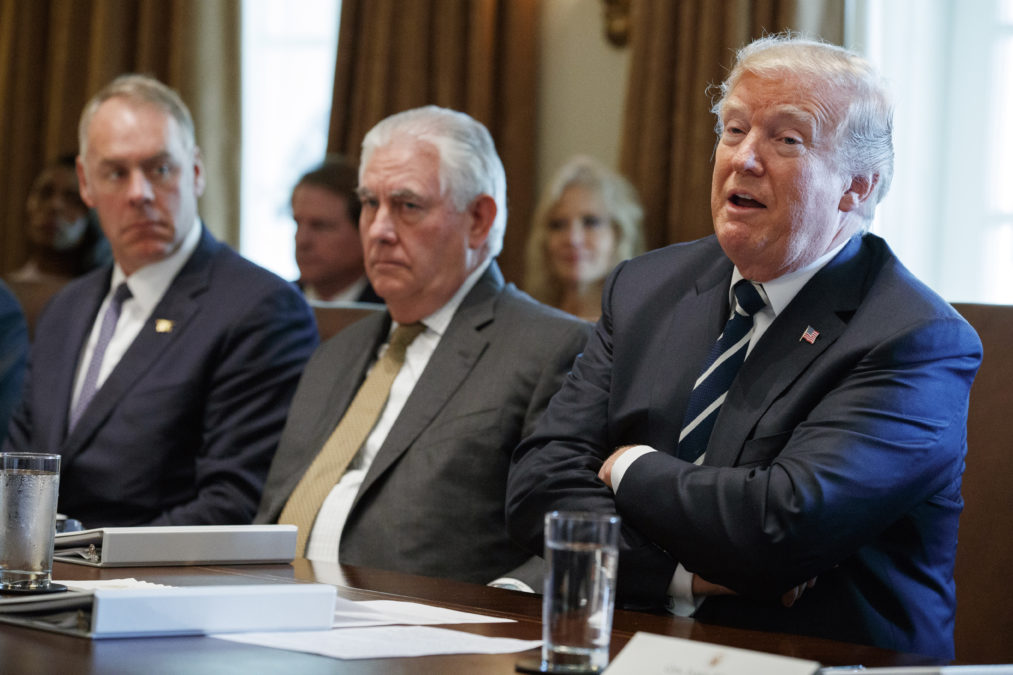 President Donald Trump speaks during a cabinet meeting at the White House as Secretary of the Interior Ryan Zinke (left) and Secretary of State Rex Tillerson (center) listen.

At the Department of Agriculture, a pesticide lobbyist is now in charge of deregulating the industry he once represented, ProPublica and The New York Times report. The president has appointed a drug lobbyist to lead the Department of Health and Human Services. Scott Pruitt, head of the Environmental Protection Agency, has swapped out top environmental experts on the Science Advisory Board for scientists with industry ties, Reveal from The Center for Investigative Reporting found last week.

And back at the Interior Department, lobbyists for loggers, oil companies, mining firms and heavy agricultural water users – along with a lawyer who specialized in helping clients game money out of a department loan program – have taken up shop managing programs they once sought to influence for financial gain, according to data provided by the Western Values Project.

It’s common for top officials to move between industry and the government, depending on which party is in power. But in this administration, such moves run counter to Trump’s campaign promise to ban lobbyists and “drain the swamp” in Washington.

Here are some examples of how those industry ties already have played out at the Interior Department:

Doug Domenech, now an assistant secretary, worked at the Interior Department under President George W. Bush, then began lobbying for loggers, oil companies and public utilities, records show. More recently, he was director of the Fueling Freedom Project, which was formed to oppose the Obama administration’s Clean Power Plan, an effort to curb global warming.

The project, which advocated what it called the “forgotten moral case for fossil fuels,” was run by the Texas Public Policy Foundation, a conservative think tank funded in part by public utilities, oil companies and the Koch brothers’ conglomerate.

Tara Sweeney, assistant secretary of Indian affairs, is a former aide to Alaska Gov. Frank Murkowski. A Native Alaskan, she lobbied for decades to open the environmentally sensitive Arctic National Wildlife Refuge to oil drilling. Most recently, she was in charge of government affairs for the Arctic Slope Regional Corp., a $2 billion Native-owned business entity that has leased vast tracts on Alaska’s North Slope for energy development.

Sweeney has criticized opponents of oil development in the refuge as “those who want to lock up large swathes of land throughout the Arctic without talking to the local people here.” She has said her goal is “to ensure that the business community and the indigenous populations have a voice in responsible economic growth” on the North Slope.

Gavin Clarkson, deputy assistant secretary for policy and economic development in the department’s Bureau of Indian Affairs, helped clients manipulate a loan guarantee program he now supervises, according to ProPublica.

Clarkson, a lawyer and member of the Choctaw Nation, was an executive in a consulting firm set up to boost tribal economic development. The Lower Brule Sioux Tribe of South Dakota sought Clarkson’s help in financing the purchase of a troubled Wall Street firm. Clarkson didn’t lobby for the tribe, but “he played a key role in a convoluted transaction that flopped and left the Interior Department fending off a $20 million liability that is still in litigation years later,” according to ProPublica. That’s 25 percent of the amount the program can guarantee in a year. As things stand, that money cannot be used to guarantee new loans. He resigned his new post last week following the ProPublica story.

David Bernhardt, top aide to Interior Secretary Ryan Zinke, is the most prominent of the department’s ex-lobbyists. His client list included oil drillers, water developers and agribusiness concerns, many with business before the Interior Department.

Bernhardt’s emails, reported by Reveal, undercut his sworn Senate testimony that he had stopped lobbying for his biggest client, the powerful Westlands Water District in California’s Central Valley. The disclosure roiled his Senate confirmation hearing. Sen. Dianne Feinstein, D-Calif., opposed Bernhardt because of his firm’s part ownership of Cadiz Inc., a company with a controversial plan to tap an aquifer beneath the Mojave Desert and sell the water to Los Angeles.

Bernhardt has promised to follow the agency’s conflict-of-interest rules, and Republican senators gave him the votes needed to be confirmed.

The Interior Department is “weighted down with lobbyists for special interests,” said Jayson O’Neill, deputy director for the Western Values Project.

In addition to lobbyists, the environmental group said another 26 Trump appointees came to the agency from jobs in so-called “extractive industries” – energy companies, mining concerns and other businesses that often seek to develop natural resources discovered on federal lands.

While campaigning, Trump called lobbyists a corrupting influence who would be unwelcome in his administration. Once elected, he said he had to rely on them because Washington was “one big lobbyist.”

“Unless you are an executive at a company like Exxon,” Greenpeace’s Kelly Mitchell wrote in a summer op-ed, the “Interior Department will likely not care about you or your community.”

The Interior Department, however, says it promotes “an ethical culture among DOI employees, allowing both employees and the public to have confidence in the Department’s management of America’s vast natural and cultural resources,” according to the department’s ethics web page.

“We build this ethical culture by providing ethics advice, counseling and education to DOI’s employees.”

By Lance Williams and Matt Smith Reveal from The Center for Investigative Reporting November 22, 2017