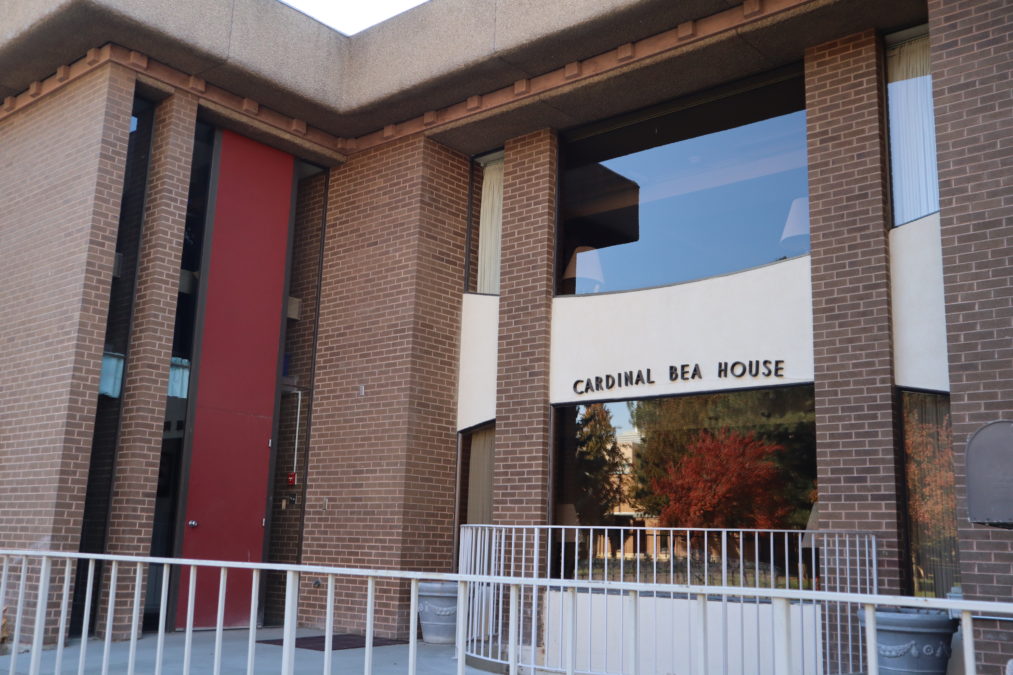 This story was produced in partnership with the Northwest News Network.

Two priests in high-level positions at Gonzaga University resigned today. Both previously held leadership roles in the Jesuits’ Oregon Province while it sent Jesuits accused of sexual abuse to live in a home on campus.

Case was named in an investigation by the Northwest News Network and Reveal from The Center for Investigative Reporting about sexually abusive Jesuits whose victims were predominantly Native girls, boys and women in Alaska and the Northwest. A Jesuit home on Gonzaga’s campus, Cardinal Bea House, became a retirement repository for at least 20 Jesuit priests accused of such sexual misconduct dating back as far as 1986.

In 1989, while serving as head of the Jesuit order’s Oregon Province, Case wrote a letter to the Catholic chaplains association backing Father James Poole’s application to become a chaplain at St. Joseph Medical Center in Tacoma, Washington.

“(Poole) is a Jesuit priest in very good standing, and it is my strong expectation that he will serve in such a ministry in a manner that is both generous and effective,” Case wrote. Poole got the job, working at the hospital until 2003 when he was removed from ministry and sent to live at Gonzaga.

Poole was a serial sexual predator. The Catholic Diocese of Fairbanks has received at least 19 reports of abuse by Poole. In 1988, Poole had been removed from his position at a radio station in Alaska after young women who had volunteered at the station wrote letters to the bishop in which they accused Poole of sexual misconduct. Father Patrick Lee led the former Oregon Province through bankruptcy proceedings brought on by abuse claims between 2009 and 2011. The Oregon Province merged with the Jesuits’ California Province to become Jesuits West in 2017.

“It is the only way we believe that all claimants can be offered a fair financial settlement within the limited resources of the province,” Lee reportedly said in statement at the time.

Cardinal Bea House is located in the middle of Gonzaga’s campus, but is owned by the Jesuit order and Gonzaga does not make decisions about who was assigned there. Priests living in the house who had been accused of abuse were given “safety plans” to restrict their interactions with students. Our investigation found they were not rigorously enforced.

Priests accused of sexual abuse were assigned to the house as far back as the 1980s. The last known Jesuit on a safety plan was moved off of Gonzaga’s campus in 2016.

Earlier this week, McCulloh issued a written statement to faculty, staff and students saying that he knew Jesuit priests accused of sexual abuse were living in a Jesuit residence on campus, but he had not been aware that any of them might be a threat to students.

McCulloh said he relied on Jesuit leadership “to inform us of any Jesuit whose history might pose a threat to our students or campus community. I deeply regret that I was not informed of the presence of (Father James) Poole, nor any other Jesuits who might pose such a danger.”

It’s unclear exactly when McCulloh learned about the accused priests living on campus. His statement provides what appears to be contradictory information.

“It is important for me to share with you, that in the years following the 2011 Oregon Province bankruptcy, I learned that there had been priests under supervised ‘safety plans’ living at the Jesuit retirement community (Bea House),” he wrote.

But in the next sentence, he says, “It was not until 2016, when the Province chose to begin relocating a number of retired men to the Sacred Heart Community in Los Gatos, that I learned that among them were Jesuits who had been on safety plans (and were moved).”

News organizations also reported on some of the accusations against Poole and his presence at Gonzaga as far back as 2005. McCulloh has worked at Gonzaga since 1990 and was appointed as interim president in 2009.

McCulloh would not make himself available to clarify his statement. He also had declined to be interviewed for the original investigation. McCulloh, Case and Lee could not immediately be reached for comment Friday night. Gonzaga spokesman David Sonntag would not elaborate on the university’s written statement.

“Employee personnel files are confidential by university policy and therefore we do not discuss the details of personnel matters,” Sonntag said.

The revelations from the investigation are expected to be mentioned during Mass this weekend at St. Aloysius Church, a Jesuit-owned parish on Gonzaga’s campus. The church’s parish priest, Father Tom Lamanna, also a Jesuit, told us we should not attend the service and are not allowed to record the proceedings.

By Emily Schwing, Michael Corey and Aaron Sankin Reveal from The Center for Investigative Reporting December 21, 2018