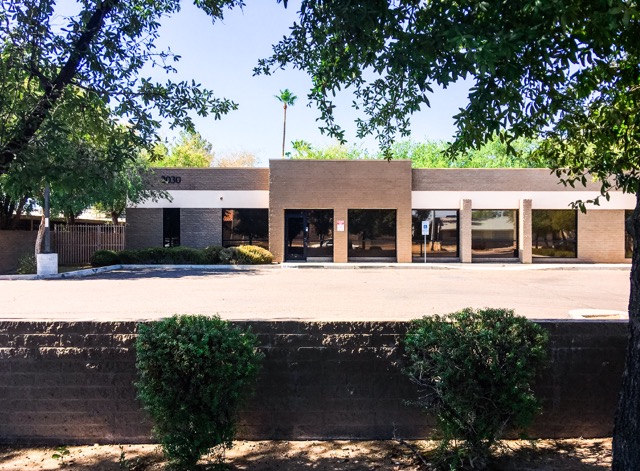 The office building where immigrant children were detained in June is on a main street just outside downtown Phoenix. Defense contractor MVM Inc., which leased the building in March, calls it a “temporary holding place” for children being flown out of the Phoenix airport to other locations.

Reveal sued Immigration and Customs Enforcement yesterday for failing to comply with the Freedom of Information Act after it kept secret the details of a contract with a company it used to transport migrant children, including those separated from their parents at the border.

In November, Reveal from The Center for Investigative Reporting requested a copy of a contract between ICE and MVM Inc. It’s the second time we’ve made such a request and the second time the agency has failed to produce the contract.

Government contacts between federal agencies and private contractors like MVM, which are funded with the public’s money, are subject to inspection by the public under the Freedom of Information Act, better known as FOIA.

In July, our investigation revealed that MVM was holding migrant children overnight in an unlicensed vacant office building in Phoenix. A video captured by a neighbor showed children, including toddlers, being ushered into the building. MVM originally maintained that the contractor doesn’t house children but later called the building in question a “temporary holding place.” Some of the children had been separated from their parents as part of President Donald Trump’s “zero tolerance” policy.

Less than a week after Reveal’s investigation, MVM acknowledged it had, in fact, held children in its Phoenix office overnight and called the practice “a regrettable exception” to its own policy, which the company says dictates children be housed in hotels when there’s a transportation delay. MVM ended its lease on the building following our investigation. We then found a second office in which a neighbor told us he witnessed children transported by MVM bathing in an office park bathroom sink.

Meanwhile, ICE spokeswoman Jennifer Elzea told us that according to its contract with MVM, “the company is authorized to use their office spaces as waiting areas for minors awaiting same-day transportation between U.S. Customs and Border Protection custody and U.S. Health and Human Services custody. These offices are not overnight housing facilities, per the contract with ICE.”

We asked ICE to provide us a copy of that contract worth up to $225 million and Elzea wrote back we’d “need to submit a FOIA request” in order to obtain it. We did just that on July 4.

The request was acknowledged by ICE two weeks later, but the agency claimed the “request is too broad in scope, did not specifically identify the records which you are seeking, or only posed questions to the agency.”

The office added that if we didn’t respond “within 30 days from the date of this letter, we will assume you are no longer interested in this FOIA request, and the case will be administratively closed.”

We responded the same day, explaining that we believed our request reasonably described the records we were seeking. We didn’t hear back about our request for months. When we inquired about it in November, ICE said our request had been closed as of Aug. 31. Despite the fact that we responded to ICE within its time frame, our request was nevertheless unilaterally closed by the agency.

So we filed a new request in November, once again asking for the contract between ICE and MVM. ICE acknowledged our request on Nov. 29. A response to a FOIA request is supposed to be provided within 20 business days. In this case, the FOIA office invoked a 10-day extension. Now, more than 30 business days have come and gone and we still have received no response and ICE has not provided a copy of the contract we first inquired about in July.

The contract we’ve been seeking for nearly eight months involves MVM, a company that held children like Wilson, who was forcibly separated from his mother. We continue to investigate the practice and the fallout from child separations – and getting our hands on a copy of the ICE-MVM contract is part of that investigation.

Some of what we’d like to know includes what obligations MVM has to ICE and to children in its custody. We’d also like to verify ICE’s claim that MVM is contractually authorized to use their “office spaces as waiting areas for minors.” And we’d like to find out whether the contract spells out possible consequences when a contract is broken, as appears to have happened when MVM held children overnight in its unlicensed Phoenix office.

We shouldn’t have to ask a federal court to order ICE to do its job. But we can’t do our job of investigating and holding government accountable otherwise.

By Aura Bogado Reveal from The Center for Investigative Reporting February 21, 2019