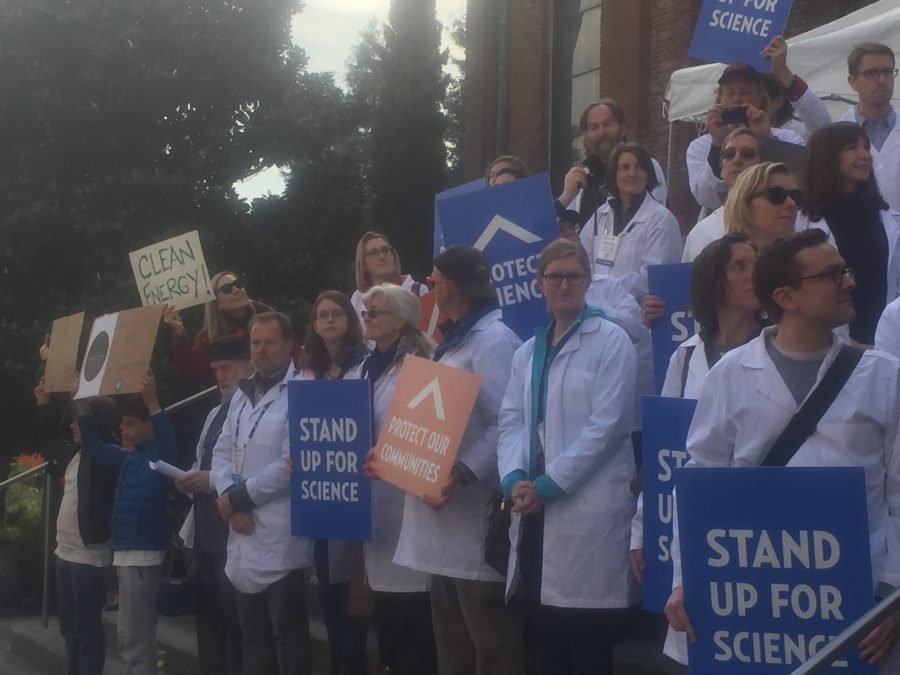 Scientists rally for research in San Francisco on Dec. 13. About 22,000 scientists were in the Bay Area for the American Geophysical Union conference.

Some 200 scientists, some wearing crisp, white lab coats, gathered Tuesday in Jessie Square, a city park near downtown San Francisco. The scientists, not usually known for protests and demonstrations, defied expectations for the afternoon and staged a public rally to support climate research and speak out against the incoming Trump administration.

The event was timed with the annual meeting of the American Geophysical Union, a massive conference of more than 22,000 scientists in the Earth and space fields. At the meeting, the Trump administration was an unavoidable backdrop, especially for those engaged in climate research.

Donald Trump has called climate change a hoax. With his cabinet nominations and federal agency appointments, Trump’s picks are seen as hostile to climate change and close to fossil fuel industries. And yet, the federal government Trump will soon oversee is a major source of funding for thousands of scientists, and directly employs many more, some of whom were at the rally on Tuesday.

The chief anxiety for many there was whether that funding would continue.

“I like working for the government because I think you can really translate the work you’re doing to help all the people in the country,” said Janet Prevey, a scientist for the U.S. Forest Service. She studies trees and climate change. “But it depends on if there’s jobs available for government employees.”

Not all scientists see Trump as an existential threat. “I have no idea what will come,” said Mark Seyfried, a researcher at the Department of Agriculture. “We’ll just have to see what happens.”

“Agriculture is a generally Republican-supported agency,” he added. “But we’ll see.”

“Wait and see” was a common refrain, and not an unexpected one for a community used to being cautious, deliberate and generally apolitical. Many wondered if that should change.

“We need to wake up,” said Anna Lang, a postdoctoral researcher at the Rochester Institute of Technology. Her research on disaster prediction is funded by federal intelligence agencies.

“Scientists are not very vocal people,” she said. “This is a pretty tame event, right? No one’s chanting. And this is about as loud as we get.”

To their credit, one speaker did successfully lead the crowd in a call-and-answer cheer: “Science and research is under attack. What do we do?” The response: “Stand up! Fight back!” But mostly the group remained like it was at that morning’s panels: present, alert, but generally unreactive. They soaked it all in.

Lang wasn’t chanting much herself.

“Any time you become louder it becomes politicized,” she said. “And we as scientists don’t function like that. We know facts and we report facts and we discuss facts and we’re happy to communicate those facts to decision makers.”

But Trump, she said, is not someone who listens to experts like herself.

“I think maybe what we need to do is start figuring out how to translate our science in a way that doesn’t get politicized, but appeals to everyone’s common humanity,” she said.

For others, the solution may be to leave government research altogether.

“I grapple with the decision to stay and try to make change happen from within, and the opportunities I have to leave and really impact change from the outside,” said Jane Zelikova, a scientist at the Department of Energy.

Zelikova has a fellowship that ends in August. But she says she’s considering leaving early and getting out of government.

“I haven’t decided yet, but I think right now I’m leaning toward leaving,” she said. “In part because I think it’s going to be really challenging to speak out the way I really want to speak out if I work for the federal government.”

Most, however, are cautiously staying put for now, waiting on more data, better observations.

Scott Pham can be reached at spham@revealnews.org. Follow him on Twitter: @scottpham. Reporter Michael Corey contributed to this story.

By Scott Pham Reveal from The Center for Investigative Reporting December 15, 2016