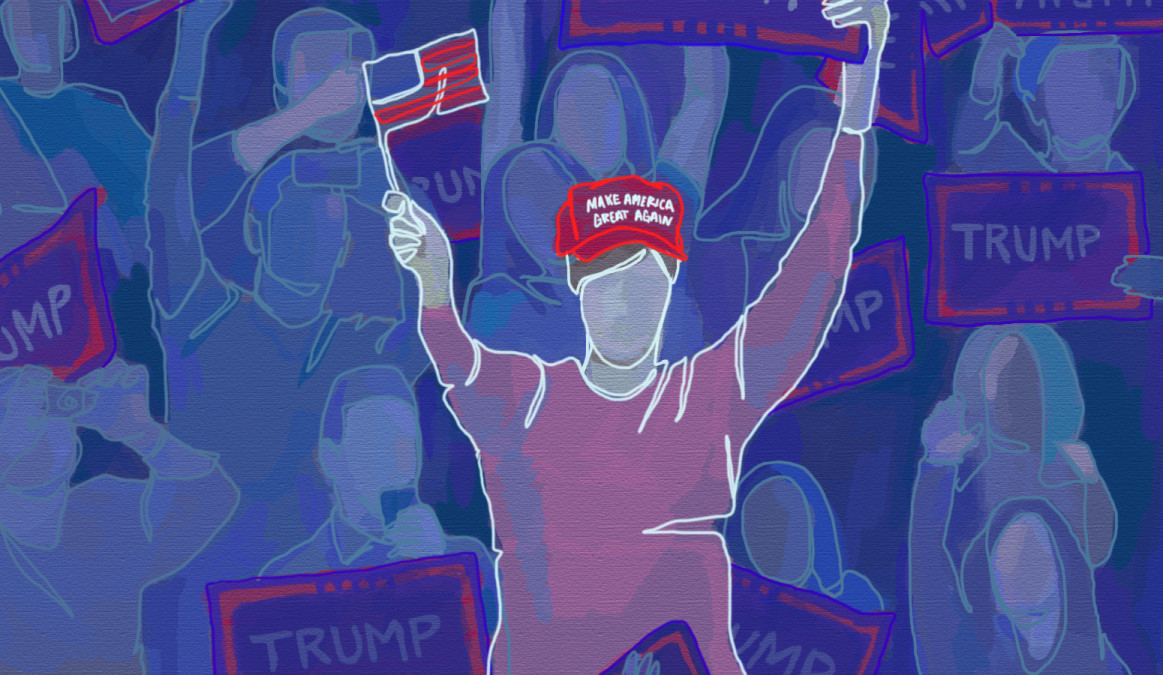 Reveal from The Center for Investigative Reporting and PRX has won a national award from the Third Coast radio competition for a poignant and personal radio story in which a Reveal producer was confronted outside a rally for then-candidate Donald Trump.

The story – “Standing Out from the Crowd at a Trump Rally” – was produced by Ike Sriskandarajah and edited by senior radio editor Deb George and executive producer Kevin Sullivan.

Along with PRX, CIR co-produces the nationally distributed “Reveal” radio show and podcast. “Reveal” features CIR’s reporting, as well as stories from public radio stations and a wide range of media partners, both nonprofit and commercial.

In Myrtle Beach, South Carolina, Trump was the main attraction at a tea party convention, where he talked about building a wall and banning Muslims: “We don’t know where these guys are from.”

At a motorcycle rally nearby, Sriskandarajah was personally confronted with the same skepticism. He interviewed members of the Knights Templar motorcycle club, which was out to support Trump’s campaign stop in the state. When he asked the men about Trump’s statements on banning Muslims from entering the country, one biker told him: “I agree with that 100 percent. … We just have to figure out who’s who.”

Sriskandarajah notes that during the interview, “I got the question I’ve been asked a lot on this trip” from one biker.

Sriskandarajah explains that when answering this question, “I start where I live now, in Oakland, California, then go back to where I was born, Wisconsin, but I know where this question’s going.”

“What’s your, uh, what is your uh, nationality?” the biker replies.

Sriskandarajah explains his family is from Sri Lanka, a small island in the Indian Ocean.

“So he latches onto India,” Sriskandarajah says in the story. “He says, ‘We’re cool with India, which is a nation of mostly Hindus, as long as it’s not Pakistan.’ ”

Sriskandarajah also talked to an African American woman who said she was trying to bridge racial divides by showing up at the rally to answer questions.

Brett Myers, who recently joined Reveal as a senior radio editor, also won a Third Coast award along with Noel Anaya and former colleagues at Youth Radio. Their story, “Emancipation: A Young Man Leaves Foster Care on His Own Terms,” was broadcast on NPR’s “All Things Considered.” It takes listeners inside a California courtroom as Anaya exits the foster care system after 20 years of failed adoptions.

Based in Chicago, the Third Coast International Audio Festival gathers audio stories from around the world and shares them via radio, podcast, public events, an annual conference and the organization’s website. Reveal’s entry in the Third Coast/Richard H. Driehaus Foundation Competition was among more than 600 from 21 countries and will be awarded in November at Third Coast’s ceremony in Chicago.

Created by The Center for Investigative Reporting and PRX, “Reveal” is public radio’s first one-hour radio show and podcast dedicated to investigative reporting. “Reveal” showcases the award-winning work of CIR and newsrooms large and small across the nation.

Piloted in 2013 and 2014, the show, which is hosted by Al Letson, is airing weekly on 440 public radio stations nationwide and is available as a podcast on iTunes, Stitcher, Soundcloud and RevealNews.org.

By Reveal staff Reveal from The Center for Investigative Reporting October 10, 2017