Was Florida in 2018 a dry run for troubles in November? 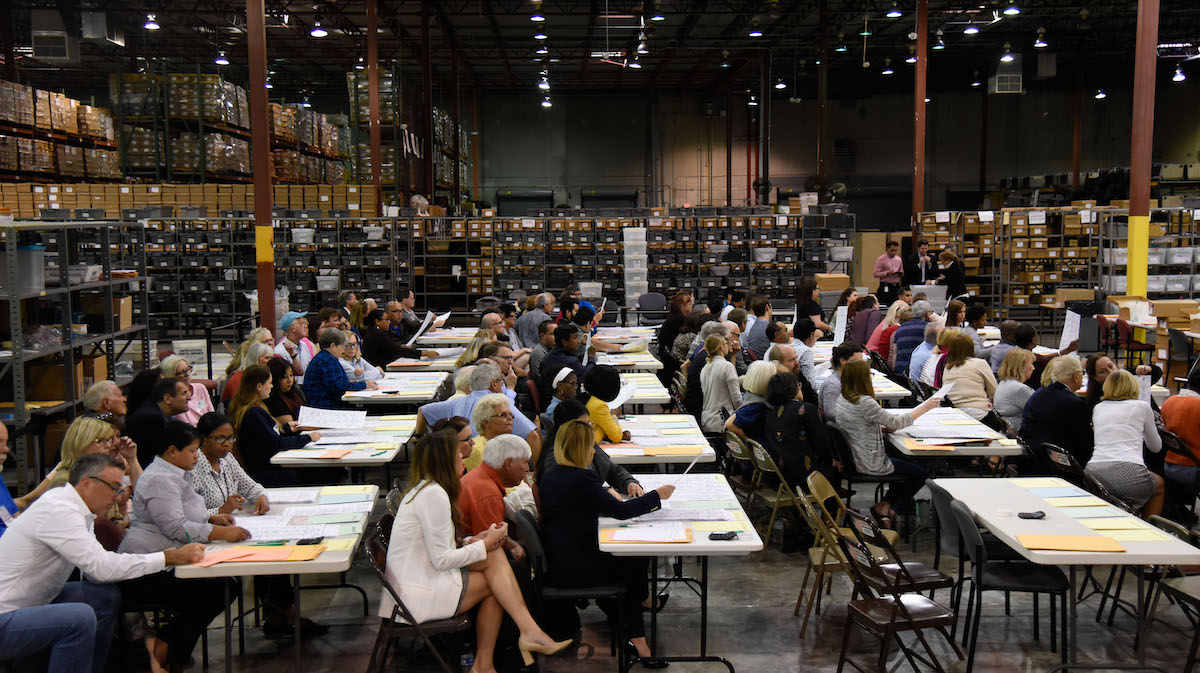 Volunteer observers watch as election workers examine ballots during a hand recount of votes cast in the U.S. Senate race in Palm Beach County, Nov. 16, 2018, at the Supervisor of Elections warehouse in West Palm Beach, Fla.

This article was reported by WLRN Public Radio.

As the nation prepares for an election that President Donald Trump has already suggested he will contest, Florida’s 2018 midterms provide a window into the political gamesmanship, bureaucratic errors and misinformation campaigns that may ensue.

That election could serve as a dry run in what is broadly expected to be a drawn-out vote count, due to the exploding numbers of people who will be voting by mail due to the pandemic.

Two years ago, Florida had five major statewide races, and nearly 1 in 3 votes – 31% – were cast by mail. This November, according to the Pew Research Center, even more voters across the country – 39% – plan to vote by mail.

Among those 2018 Florida races were divisive contests for governor, between Democrat Andrew Gillum and Republican Ron DeSantis, and for the U.S. Senate, between outgoing Republican Gov. Rick Scott and incumbent Democrat Bill Nelson. As the election results started to come in, it became clear that three of the statewide races were so close that they were headed for an automatic recount.

Then something odd started to happen.

In Broward County, the largest Democratic stronghold in the state, 100% of precincts had reported their election results. Yet the number of total votes kept climbing up and up.

It was unclear at the time where these votes were coming from. In the days after the election, the vote totals in Broward County kept climbing, and Republican margins of victory in the races started to shrink. In one statewide race, for the commissioner of agriculture, Democrat Nikki Fried soon narrowly overtook Republican Matt Caldwell, who had already declared victory.

A similar scenario could play out in multiple states this November, as most Trump supporters across the country, 60%, plan to vote in person – meaning their votes will be tallied quickly – while most supporters of Democratic presidential candidate Joe Biden, 58%, plan to vote by mail, votes that will likely take longer to count.

In the aftermath of Election Day in 2018, Republican protesters began swarming the Broward County elections office warehouse in Lauderhill, where the ballots were being counted. They started chanting, “Stop the steal!” and claimed rampant fraud was taking place inside.

Meanwhile, Democrats showed up, calling for election officials to continue the vote count.

Republican U.S. Rep. Matt Gaetz of northwest Florida came to Broward County to participate in the actions. “Rapunzel spun straw into gold. Here, you’re spinnin’ tens of thousands of ballots out of thin air,” Gaetz told a fired-up crowd, “out of nothing.”

In Tallahassee, Scott lobbed accusations that “rampant fraud” was taking place in Broward County and in Palm Beach County, where aged machines were delaying the vote counts. “I will not sit idly by while unethical liberals try to steal this election from the great people of Florida,” Scott said.

Then Trump, who strongly supported Scott and DeSantis, entered the melee.

“There’s bad things going on in Broward County, really bad things. All of a sudden, they’re finding votes out of nowhere,” the president said. “Rick Scott, who won by – you know, it was close, but he won by a comfortable margin – every couple hours, it goes down a little bit.”

At least 10 lawsuits were filed. Conspiracy theories were widespread. Fox News carried round-the-clock coverage at the Broward County Supervisor of Elections Office, giving viewers across the nation a play-by-play of what was happening. In the end, Scott and DeSantis hung on to their narrow victories.

Looking back, the events felt like the beginnings of the 2020 presidential election. Some of the first “Trump 2020” banners were seen at the protests.

In a September presidential debate, Trump was asked if he would ask his supporters to remain calm and not engage in “unrest” if there is a delay counting vote-by-mail ballots, which by nature take longer to count.

“I’m urging my supporters to go into the polls and watch very carefully. Because that’s what has to happen. I am urging them to do it,” Trump said. “If I see tens of thousands of ballots being manipulated, I can’t go along with that.”

“This is not going to end well,” Trump said.

Biden pushed back on Trump’s statements.

“This is all about trying to dissuade people from voting because he’s trying to scare people into thinking that it’s not going to be legitimate,” Biden said. “The fact is that there are going to be millions of people, because of COVID, that are going to be voting by mail-in ballots – like he does, by the way.”

In 2018, the problem was that Broward County dropped the ball.

Residents had been mailing in their vote-by-mail ballots for weeks before Election Day, but the Supervisor of Elections Office had not taken steps to count tens of thousands of those ballots until Election Day itself, according to an audit released this year.

The county could have started counting vote-by-mail ballots 15 days before the election, per state law at the time.

The mystery votes were not fraudulent; they simply were counted later than they should have been counted. That in itself was not illegal, since the deadline for reporting the first unofficial vote tally is not until the Saturday after Election Day in Florida.

But the delay left room for conspiracy theories and wild allegations to fester.

Broward Supervisor of Elections Brenda Snipes was removed from office for “incompetence” during the last days of Scott’s administration. Her handling of the 2018 election was the latest incident in a long string of mismanagement – she also missed the 2018 recount deadline for the state of Florida by mere seconds.

In the audit of the 2018 elections, which was released this year, the scope of Snipes’ troubles was laid bare. The Office of the Broward County Auditor found that the entire election in Broward County was “understaffed,” that the delay in counting vote-by-mail ballots held up election results for the entire state, and that all the issues left it so that even auditors could not “provide assurance” about the final vote counts reported by Broward County. Most troublingly, the auditor found that half of precincts recorded more ballots cast than there were voters on Election Day.

Scott appointed Republican Peter Antonacci to replace Snipes as the election supervisor for Broward County. Since coming into office, he has changed protocols for counting vote-by-mail ballots and bought new equipment.

The primary election in August was one of the first big tests of Antonacci’s new management. Yet even that election was presented with some problems because of vote-by-mail ballots.

“We were assaulted yesterday by over 13,000 vote-by-mail ballots that came in on Election Day,” Antonacci told reporters the morning after the primary election. “That’s the very thing that caused the meltdown in 2018.”

This was an effort to stop so many ballots from getting mailed at the last minute and to discourage backlogs in counting vote-by-mail ballots.

Even so, on primary night, Antonacci’s office didn’t complete the vote count until 2 a.m. Speaking with reporters, he acknowledged that counting all the mail-in ballots on election night might not be realistic, even if it is the goal. “We intend to count all our ballots election night or early next morning,” he said. “We know what we’re up against in November. But our goal is to finish that night and we’re done.”

Across the nation, a huge uptick in mail-in voting is expected in response to the coronavirus pandemic. The reality is that Florida, even with its ongoing issues, has far more experience with voting by mail than many other states. Floridians have had the option to vote by mail since 2002.

In several states, vote-by-mail ballots can only start getting processed on Election Day for the 2020 election, according to the National Conference of State Legislatures. These include Alabama, Kentucky, Michigan, Mississippi, Pennsylvania, West Virginia and Wyoming.

If people vote by mail in large numbers, in those states especially, it could bring a significant backlog in nationwide election results.

This could lead to a different, less final kind of election night – unlike what many Americans have come to expect in recent decades. But it would be far from unprecedented.

“Really only since World War II have we had election results that we could call on election night,” said Ion Sancho, who served as the supervisor of elections in Florida’s Leon County for 28 years before retiring in 2016. “This is a relatively recent phenomenon.”

Sancho was in office during the contested 2000 presidential election in Florida and has seen firsthand how the increasing prevalence of mail-in voting should temper the public’s expectation of immediate, comprehensive election results.

This story was edited by Alicia Zuckerman, Terence Shepherd and Lance Dixon at WLRN and Esther Kaplan at Reveal.

Was Florida in 2018 a dry run for troubles in November?

By Caitie Switalski and Daniel Rivero Reveal from The Center for Investigative Reporting October 2, 2020