The Hate Report: A guide to this weekend’s Bay Area protests 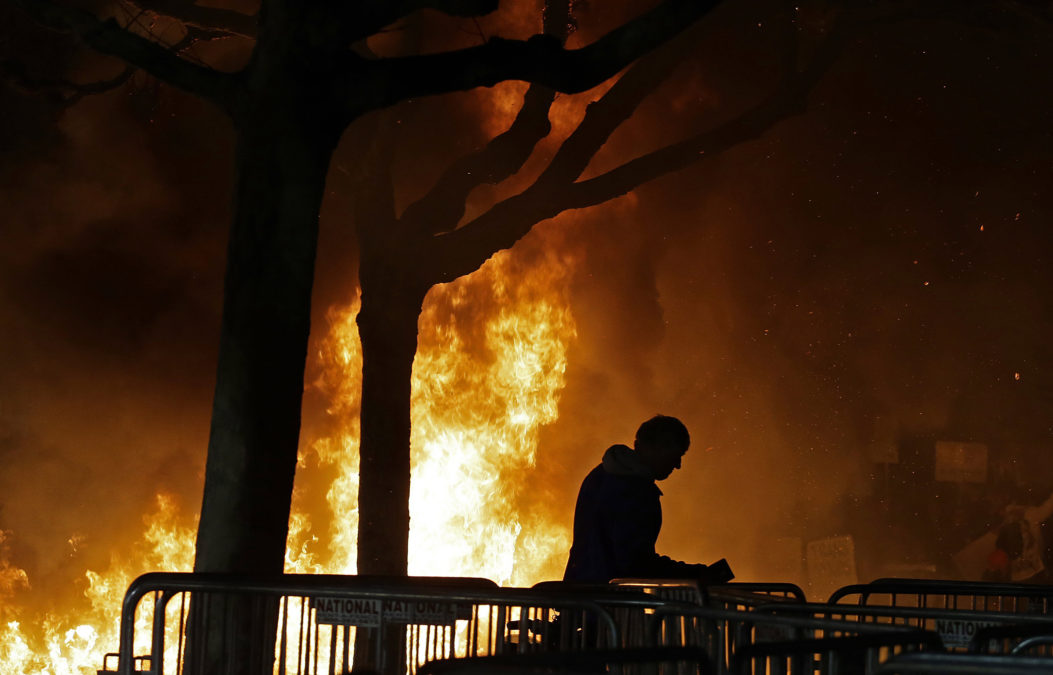 A fire burns at a protest of a scheduled speaking appearance by then-Breitbart News editor Milo Yiannopoulos on the UC Berkeley campus on Feb. 1.

In this week’s Hate Report: A look at the impending “free speech” protests in the San Francisco Bay Area, a wave of resignations hits the Trump administration following the president’s response to Charlottesville and momentum grows for abolishing more monuments.

This weekend, there will be at least two right-wing rallies in the San Francisco Bay Area that are expected to draw thousands of protesters and counterprotesters.

Coming so soon after the deadly protests in Charlottesville, it is tempting to place these two California rallies in the same category as the Virginia rally: shows of force by white nationalist agitators in liberal communities.

But in key ways, the planned protests in San Francisco and Berkeley are, at least on their face, significantly different to the “Unite the Right” rally that brought hundreds of American racists to downtown Charlottesville.

Unlike the Charlottesville rally, which was always about race politics, the organizers of the “Freedom Rally,” planned for Crissy Field on Saturday, and a protest called “No to Marxism in America” planned for Berkeley on Sunday, have both taken pains to tell white supremacists and other extremists that they’re not welcome at their events.

The Berkeley event has been organized by Amber Cummings, a self-described “trans patriot.” On the Facebook page for the rally, Cummings writes, “I do not invite or condone anyone showing up to this event with the intent of starting violence. I also want to add I do not stand with any racist groups like the KKK, Neo Nazis, or any form of racist groups.”

However, Cummings has also made clear that she puts anti-fascist protesters in the same category as white supremacists. In an interview with reporters on Tuesday, she ranted that Marxism and “anti-American thought” is being taught at the UC Berkeley campuses.

In an interview this week, Joey Gibson, the organizer of the San Francisco event, claimed the day will be about peace, love and exercising First Amendment rights. He said the “Freedom Rally” has been planned since long before Charlottesville, and that racists will be turned away from Crissy Field (he didn’t elaborate on how this would happen). And he pointed out that the Facebook page for the rally specifically requests that known white nationalist agitators Richard Spencer and Nathan Damigo don’t show up. (Spencer told us by text message that he hadn’t heard about the event. He said that it “sounds pretty corny.”)

But for someone who professes to be sick of extremism, Gibson is walking a fine line.

He’s well aware that a right-wing rally in San Francisco so soon after Charlottesville will attract thousands of counterprotesters from the left, probably including some militant anti-fascists.

And while he preaches unity, Gibson has specifically invited Kyle Chapman to speak at his rally. Chapman is best known as “Based Stickman,” who gained fame for fighting counterprotesters with a stick in Berkeley earlier this year.

Last week, the Alameda County district attorney charged Chapman with possession of a “leaded stick.” He’s due in court today and may be ordered by a judge to stay away from Saturday’s rally.

Gibson’s previous rallies also were magnets for white supremacists. But Gibson, who identifies as Japanese American, insists he’s not a racist. At a recent rally in Seattle he condemned white supremacists and neo-Nazis. “I have no use for that kind of thinking. It’s wrong,” he said. And he’s quick to point out that most of the speakers invited to Saturday’s rally are non-white.

Above all, Gibson’s guiding political philosophy seems to be antagonism, not unity. He sees himself as a sort of crusader for freedom of speech, who purposefully arranges rallies that focus on discussing controversial issues at difficult times. And he admits that one reason he holds these events is to expose radicals on the left, like anti-fascists, who show up to try and shut them down.

His group, known as Patriot Prayer, held a pro-President Donald Trump, “pro-free speech” rally in Portland, Oregon, a little more than a week after Jeremy Christian allegedly stabbed three people on a city train for defending two young Muslim girls. And Gibson acknowledged that bringing a rally to San Francisco was a calculated move.

At least some leftist protesters in the city have decided not to take Gibson’s bait. They have organized rallies in other parts of the city on Saturday.

What to look for

In retrospect, it was perhaps inevitable that Charlottesville was always going to descend into violence. This time, it’s not so clear.

We are sending a team of reporters to both protests. Here are the three biggest things we’ll be looking at heading into the weekend:

1) Will the neo-Nazis and white supremacists show up?

Gibson says he’s going to keep these groups away, but he hasn’t said how he’ll do that. Cummings says she doesn’t want white supremacists at her rally, but how will she keep them away? We’ll be keeping tabs on the different far-right groups who show up to either rally.

2) Will the counterprotesters confront the right-wing protesters?

On Sunday, one group is rallying several blocks from the No to Marxism protest. However, another group plans on marching directly to the right-wing protest.

We have seen previous far-right protests and counterprotests in Berkeley descend into vandalism and violence. Will the same thing happen this time?

3) How did Charlottesville change things?

There has been a lot of discussion among left-wing groups in the past two weeks about whether Charlottesville has changed attitudes toward militant anti-fascist protesters. Do nonviolent leftists have more sympathy for them now? Or are people more likely to shy away from confrontations?

4) How do police respond?

Former Vice President Al Gore suggested Trump himself should resign, but the president has yet to take Gore up on that advice.

The Unite the Right protest in Charlottesville was ostensibly about protesting the removal of a statue of Confederate Gen. Robert E. Lee. In the wake of that protest, the push to erase monuments celebrating the Confederacy has intensified.

The online petition site Change.org has seen over 125 user-created petitions calling for the removal of Confederate symbols from statue platforms, flagpoles and school buildings. So far, these petitions have generated an aggregate total of over half a million signatures.

Those petitions include efforts to rename Jacksonville, Florida’s Nathan Bedford Forrest High School, remove a memorial to Confederate soldiers on the University of North Carolina campus, and to replace a monument to the Confederacy in Portsmouth, Virginia, with a statue of Grammy-winning, Portsmouth-born rapper Missy Elliott.

Lance Williams contributed to this report.

The Hate Report: A guide to this weekend’s Bay Area protests

By Will Carless and Aaron Sankin Reveal from The Center for Investigative Reporting August 25, 2017