A lesson from the last recession becomes California law 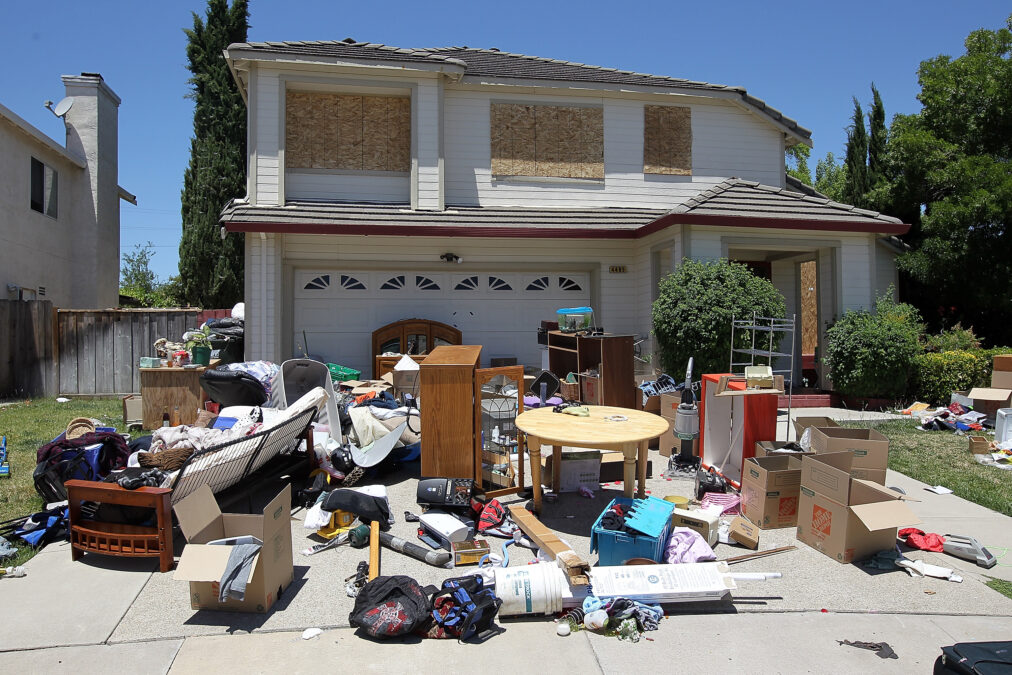 Furniture and personal belongings litter the driveway and front yard of a house that appears to be abandoned in Antioch, Calif., in 2012.

Six months after pandemic-induced lockdowns started tanking the U.S. economy and sparked mass unemployment, a feared foreclosure tsunami has not yet come to pass. Thanks in part to financial relief from the CARES Act, as well as government-sponsored forbearance programs that have allowed millions of homeowners to delay mortgage payments, new foreclosures were down 81% in August compared with a year ago, according to ATTOM Data Solutions.

Given the grim state of the economy, however, housing advocates are fearful of what comes next. “The key word is ‘yet.’ We haven’t seen a ton of foreclosures … yet,” said Julia Gordon, a former housing official in the Obama administration who is now president of the National Community Stabilization Trust.

The last time the economy went into deep recession, after the 2008 housing bust, nearly 8 million families lost their homes to foreclosure. Well-heeled speculators, who frequently hide behind shell companies, swooped in to effect a generational transfer of wealth. A handful of real estate magnates close to now-President Donald Trump – such as his inaugural committee chairman Tom Barrack – amassed tens of thousands of these foreclosed homes, frequently offering their former owners leases that amounted to steep increases in rent, while requiring them to maintain the properties themselves.

“It’s been the greatest thing I’ve ever done in my professional life, honestly,“ Barrack said in 2012, boasting of sending “21-year-old kids … with Bluetooths on” to courthouses across the country with “bags of cashier’s checks” to help build an empire of 35,000 homes.

Once again, as The Wall Street Journal reports, corporate landlords are marshaling billions of dollars for a potential buying binge. Historically low interest rates have driven a spike in sales of existing homes, which have reached levels not seen since 2006, according to the National Association of Realtors. In August, the private equity firm Blackstone Group, which bought 80,000 homes after the last bust, invested $300 million in Tricon Residential, a real estate investment trust that currently owns 30,000 homes and is looking to acquire more. But if relief measures expire and mass foreclosures ensue, speculators with money to burn could once again make massive profit.

A bill signed into law Monday by California Gov. Gavin Newsom seeks to prevent a repeat of history by overhauling the way foreclosures are sold in the state. It bans bulk auctions of homes, giving tenants and other community stakeholders exclusive windows to match bids made by speculators, with the idea of keeping property in the community’s hands.

Senate Bill 1079 was prompted in part by my book “Homewreckers.” The bill’s author, Democratic state Sen. Nancy Skinner of Berkeley, says the preemptive timing is key. “We were late to the party” during the Great Recession, she said. By the time legislation passed, “the vast majority of homes had already been foreclosed on.”

But because real estate values remain high, solutions that would have worked during the last recession may not help struggling homeowners this time.

“The vast majority of homeowners will continue to have equity,” Mark Calabria, director of the Federal Housing Finance Agency, told me in March. Even struggling homeowners will more likely sell their homes through regular avenues than face a foreclosure auction, he said. Plus, speculators are unlikely to be buying at deep discounts, which the bill assumes families would be able to match if given more time.

The new law’s 45-day delay in auctions also may not be long enough to help cities and nonprofits arrange for necessary financing to bid on distressed properties, said Gordon, of the National Community Stabilization Trust, and the ban on bulk auctions misunderstands how Wall Street landlords bought homes last time. Even though speculators often acquired dozens of homes at a single auction, they did so by buying the homes individually.

Battle lines have nonetheless been drawn on the new law, with community groups on one side and the real estate industry and California Chamber of Commerce on the other.

“SB 1079 doesn’t do anything to address the real cause of the housing problem in California,” David Howard, executive director of the National Rental Home Council, a lobby group representing corporate landlords, said in an email. “There aren’t enough homes and there are not nearly enough being built.”

But for former homeowners such as Vanessa Bulnes, a 58-year-old child care worker who lost her Oakland home to foreclosure in 2012, any action is appreciated. When the family defaulted, court records show Bulnes and her husband, Richard, owed $317,000 on their two-bedroom, 864-square-foot bungalow. After they were forced to give up the house, a real estate firm bought it for just $107,000.

Since the foreclosure, the Bulneses have rented a nearby house from a series of corporate landlords, including Barrack’s company, which bought and sold it. While Barrack and his other investors were using these homes as collateral for a loan of half a billion dollars from Deutsche Bank, tenants such as the Bulneses were paying higher and higher rents to occupy the property.

“How do I know I could have afforded to hold onto my home if I had just a little more time?” Vanessa Bulnes asked rhetorically. “Because all this time, I’ve been paying rent. I could have spent all that money paying my mortgage instead.”

A back-of-the-envelope calculation indicates her family has paid about $200,000 in rent over the last eight years. All that money has gone to her landlords.

If Bulnes had been able to keep her mortgage, however, she’d have been able to save and build wealth. According to the real estate website Redfin, her former home is now worth around $600,000.

A lesson from the last recession becomes California law

By Aaron Glantz Reveal from The Center for Investigative Reporting September 29, 2020