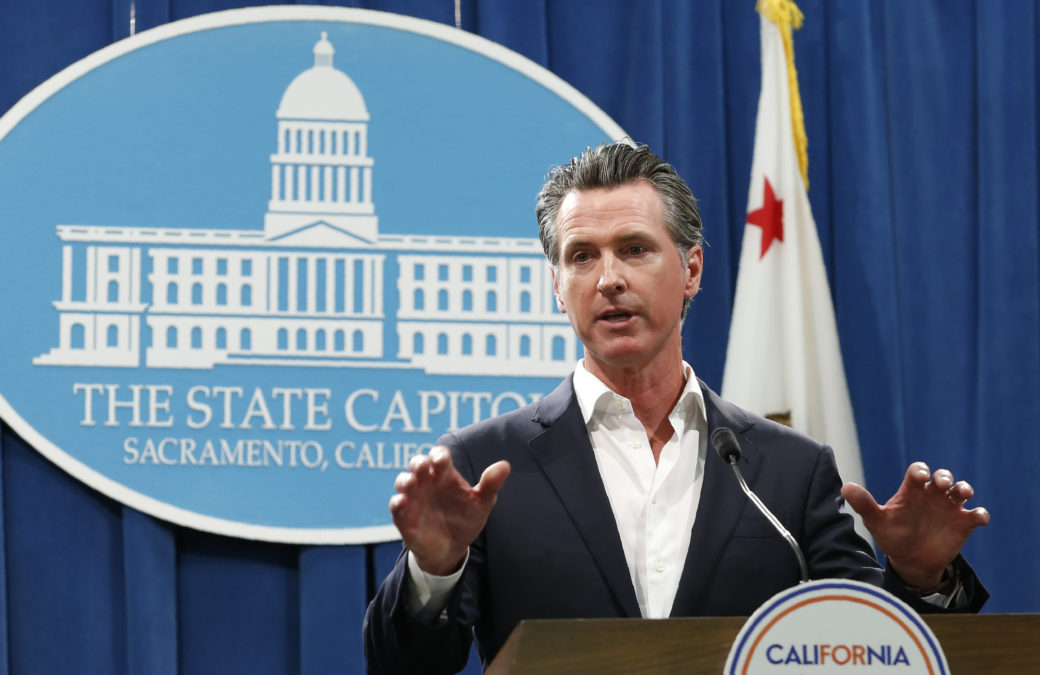 California Gov. Gavin Newsom is shown in September, soon after his office announced an enforcement initiative aimed at cracking down on scofflaws in the senior care-home industry.

Revelations about wage theft and abusive treatment of caregivers in America’s senior care-home industry have prompted tougher enforcement, a congressional hearing and plans for new state legislation in 2020.

Responding to a series of stories by Reveal from The Center for Investigative Reporting, Rep. Robert C. Scott, D-Va., chairman of the House Education and Labor Committee, said he intends to hold an oversight hearing early this year in which he will press Labor Department officials to crack down on widespread exploitation in the booming industry.

“The Center for Investigative Reporting investigation revealed an alarming rate of wage theft among senior residential care industry workers,” a committee aide told Reveal. “CIR’s report will be a topic of discussion during future oversight hearings with the Department of Labor.”

In August, after the first installments of Reveal’s four-part investigation appeared, Scott sent a letter to Cheryl Stanton, administrator of the Labor Department’s Wage and Hour Division, demanding a full accounting of the steps the agency is taking to protect workers from labor abuse in the industry.

Reveal found that many care workers are poor immigrants who were paid about $2 an hour to work around the clock, in some cases by operators who live lavishly. Workers frequently were harassed and sometimes fired if they complained. Some were trafficked, and two reported having miscarriages after being overworked. One operator, who was charged along with other family members with cheating workers out of more than $8 million in wages from 2009 through 2018, also had been criminally charged with raping a caregiver. He is in jail awaiting trial, which is scheduled for Monday.

Reveal also found that companies continued to operate despite having failed to pay wage theft judgments and that Medicaid funds still flowed to operators convicted of fraud or previously cited for labor violations.

The investigation prompted other lawmakers to respond. Democratic Sens. Elizabeth Warren of Massachusetts and Sherrod Brown of Ohio cited Reveal’s findings to demand answers from several investors in long-term care facilities – including The Carlyle Group, one of the largest private equity firms in the world – about potential violations of federal or state laws in their facilities.

A crackdown in California

Several state lawmakers in California took action by drafting legislation to tighten requirements for operators and provide more protections for both care workers and seniors. The Assembly’s Human Services and Aging and Long-Term Care committees are considering potential legislative fixes with the state agency that oversees licensing that will be unveiled later this month.

California Gov. Gavin Newsom’s office announced a new initiative in August aimed at holding operators accountable for abusing workers and seniors – “up to and including license revocation.”

Inspectors from the state Departments of Social Services and Industrial Relations then launched an enforcement sweep. So far, they have conducted joint visits to 14 facilities around the state. The agencies also are forcing facilities with outstanding wage theft judgments to pay what they owe.

Since August, the Industrial Relations Department has shared with the Social Services Department information on 66 outstanding wage theft judgments. Licensing officials then sent letters to facilities about 51 of these judgments. So far, 10 facilities have paid in full, agreed to settle or been put on a payment plan. The remaining 41 judgments are unresolved because facilities have closed or filed for bankruptcy, among other factors, said Scott Murray, a spokesman for the Social Services Department.

The California Fair Employment and Housing Department, the largest state civil rights agency in the country, is developing a plan with the state labor commissioner’s office to educate care workers on their labor rights and prosecute any senior care-home operators who harass or threaten their employees or discriminate against them based on their national origin.

The state Departments of Social Services and Industrial Relations were prompted to begin working more closely with the U.S. Department of Labor to thwart wage theft in the assisted living industry. Discussions are ongoing, spokespeople for the two state agencies told Reveal, but a spokeswoman for the Labor Department’s Wage and Hour Division declined to provide details.

Labor advocates called on federal officials to launch investigations into the abuse nationwide.

“It’s absolutely shocking and appalling,” Judy Conti, government affairs director at the National Employment Law Project, said of Reveal’s findings. “There is such a clear-cut need for federal intervention here, and the federal Department of Labor and Department of Justice should be investigating.”

Conti also urged the Labor Department to work with officials at the Centers for Medicare & Medicaid Services to ensure that no senior care facilities previously cited for labor violations or convicted of fraud continue to collect Medicaid reimbursements.

Ruth Silver Taube, adjunct professor at the Santa Clara University School of Law and supervising attorney of its Workers’ Rights Clinic, argues that stronger state legislation is needed to stem the rampant wage theft in the industry.

“I think there’s a culture of noncompliance,” she said. “For some care homes, there is a business model based on wage theft. We need to change the business model to eliminate the widespread violations.”

This story was edited by Narda Zacchino and Esther Kaplan and copy edited by Nikki Frick.

By Jennifer Gollan Reveal from The Center for Investigative Reporting January 3, 2020