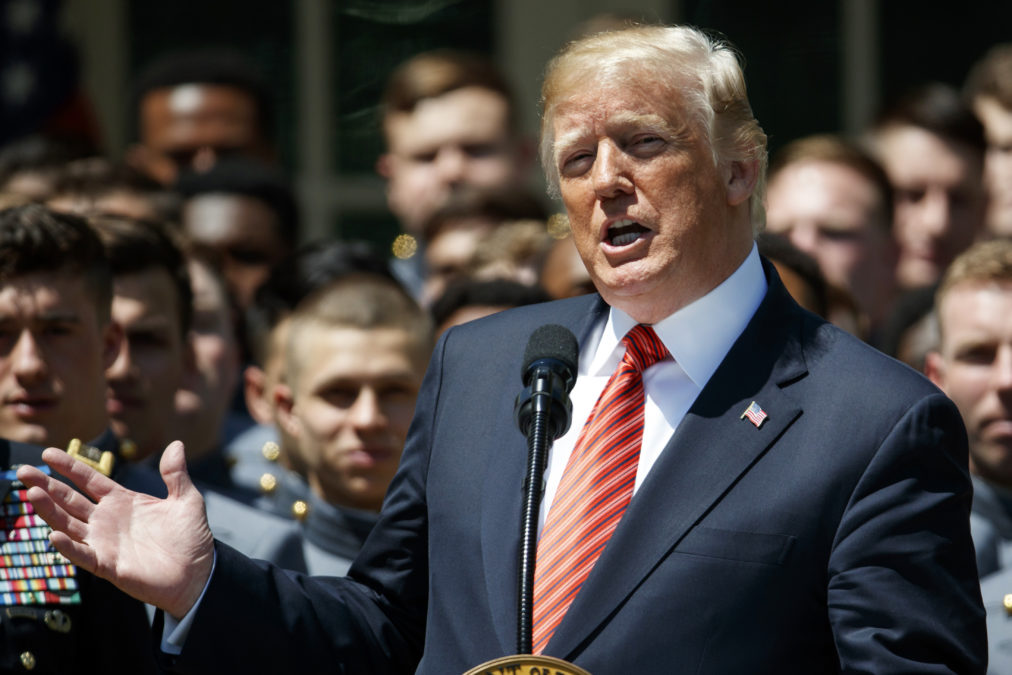 President Donald Trump speaks during a ceremony to present the Commander in Chief trophy to the U.S. Military Academy football team in the Rose Garden of the White House, Tuesday, May 1, 2018, in Washington.

In the early months of President Donald Trump’s administration, there was a lot of controversy surrounding a Department of Homeland Security program called Countering Violent Extremism.

Now, almost two years later, we decided to check on the program to see how things have panned out.

First, some background: Last year, we showed how anti-hate groups had been stiffed out of millions of dollars by the program, which issues about $10 million in grants for grassroots organizations that work to deter people from joining extremist organizations, under the Trump administration.

Trump planned to rename the effort “Countering Islamic Extremism,” a move that mirrored the president and his closest advisers’ fiery rhetoric on Islam.

In response, in February 2017, a dozen Democratic senators expressed dismay at the changing direction of the program. They worried that taking the focus away from white supremacists and other homegrown extremists “would severely damage our credibility with foreign allies and partners as an honest broker in the fight against violent extremism, and prove divisive in communities across our country,” the senators wrote.

First, the program still is called Countering Violent Extremism. No name change. And the fear that the program would become exclusively obsessed with Islamic extremism doesn’t seem to have panned out.

Three recent Department of Homeland Security reports on the program stressed that many of the organizations that received grants target “all forms of violent extremism.” The reports also singled out two programs in Denver and Dearborn, Michigan, that explicitly target non-Islamic terrorists.

The Denver Police Department’s program, for example, received almost $500,000 to target “all forms of violent extremism, with a particular focus on domestic violent extremism (white supremacist VE, animal rights/eco-terrorism VE, sovereign citizen VE, etc.),” according to one of the reports.

We reached out to the Denver Police Department to confirm whether this is accurate. Leslie Mongin, who coordinates the program for the department, wrote in an email that it is “focused on all forms of violent extremism, which includes the groups listed in the report.”

Not that there aren’t still concerns about Trump’s program.

Emmanuel Mauleón, who monitors Countering Violent Extremism efforts for the Brennan Center for Justice’s Liberty and National Security program at New York University Law School, wrote a scathing analysis of the program on JustSecurity.org last week. In an interview, Mauleón said he’s most concerned about the program being used as a way for law enforcement agencies to monitor minority communities.

“This is a program that is maintaining its objectives since the Obama administration,” he said. “With the Trump administration, it’s not necessarily becoming worse, but it’s becoming more explicit.”

Here’s how Mauleón put it in his analysis:

All Obama-era pretenses that CVE (Countering Violent Extremism) would target a variety of communities deemed “vulnerable” to radicalization have been abandoned. Grantee reports are now hyper-specific about targeted communities. For example, the quarterly reports note that the Boston Police Department, a CVE grant recipient, exclusively targets Muslim “Somali-American youth” in its efforts. The Seattle Police Department targets its program on a “micro-neighborhood level,” seeking to prevent radicalization among “refugee women, youth and disenfranchised populations in ethnically and culturally diverse neighborhoods.” These reports cast-aside the Obama-era feel-good language and make clear CVE’s true discriminatory intent.

In addition, the president’s new National Strategy for Counterterrorism provides some evidence that Trump’s bluster on Islamic extremism and terrorism isn’t necessarily trickling down to all his administration’s policies.

When the strategy was announced, the anti-Islamic group the Clarion Project proclaimed on its website: “Promises Kept: Trump Focuses on Radical Islamist Terrorists.” The strategy “focuses on radical Islamist terrorists at all levels,” the article states, noting that it doesn’t include the words “countering violent extremism.”

That’s a far cry from what the president has said publicly.

Trump has been quick to condemn terrorist acts committed by radical Islamists, but he has shied away from condemning acts of terror by white supremacists and other non-Islamic extremists.

Heidi Beirich, who leads the Intelligence Project at the Southern Poverty Law Center, said the news about the Countering Violent Extremism program and the new counterterrorism strategy comes as something of a surprise, given Trump’s rhetoric about Islamist terrorism.

“My expectation, given Trump’s public statements about Muslims and his rejection of hate crimes being a problem, would make you think differently,” Beirich said.

But, she said, this is just further evidence that the Justice Department continues to take domestic terrorism seriously, regardless of what the president says on Twitter or at press conferences.

Jeffrey Karol Bonczyk from Boulder, Colorado, has been charged with a felony hate crime after he allegedly told a woman to “go back to China” and then knocked her to the ground and repeatedly kicked her last week.

“I’m the first one here, I’m the white one, I’m the Viking,” Bonczyk allegedly told the victim.

Meanwhile, in Endicott, New York, 24-year-old Tyler Zacharias, who is white, was charged with a hate crime for allegedly pointing a shotgun at a black teenager and shouting a racial slur last week. Nobody was physically injured in the incident, though police found shotgun casings at the scene.

By Will Carless Reveal from The Center for Investigative Reporting October 12, 2018